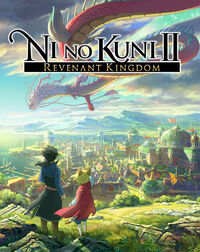 The cover of Ni No Kuni II: Revenant Kingdom

Ni No Kuni II (二ノ国II レヴァナントキングダム) is telling the story of young King Evan, who sets out on the epic quest to found a new kingdom and to save the world from terrible evil with the help of his allies. The action JRPG is developed by Level-5 and published by Bandai Namco Entertainment. Winner of 7 E3 Awards and 16 Nominations. LEVEL-5's mastery of the RPG genre is combined with music composed by the renowned Joe Hisaishi and character designs by animation artist Yoshiyuki Momose.

Pre-order the Day One Edition to receive:

Pre-order the Premium Edition to receive:

Pre-order the Collector's Edition to receive:

A season pass for Ni no Kuni II: REVENANT KINGDOM is also available for purchase digitally on the PlayStation 4 system and STEAM for $19.99. The season pass content includes the following:

Two large DLC releases – Enjoy additional Ni no Kuni II: REVENANT KINGDOM gameplay content fit for a king! The contents of these DLCs are under protection of the king’s royal guard for now, but stay tuned for more information.
Supply Kit – A healthy heaping of items hand-picked for the discerning adventurer.