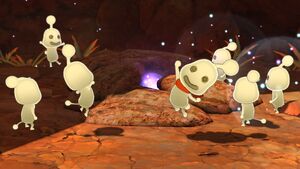 Higgledies are small magical creatures and allies of the party of Evan. The game starts with three different Higgledies, but Evan and his friends can unlock more in their adventures. To unlock more of them, the friends must find the Higgledy Stones in every area.

Higgledies are introduced when Evan and Roland reach Auntie Martha during the game's second chapter. Once Evan has started his new kingdom, he can build a Higglery and craft Higgledies.

Some of them can be found, but some are also crafted.

Getting your Higgledy friends to help

(From the ingame tutorial)